Get Started with MDT

Get started with MDT

This article provides an overview of the features, components, and capabilities of the Microsoft Deployment Toolkit (MDT). When you have finished reviewing this information, see Prepare for deployment with MDT.

MDT is a unified collection of tools, processes, and guidance for automating desktop and server deployment. You can use it to create reference images or as a complete deployment solution. MDT is one of the most important tools available to IT professionals today.

In addition to reducing deployment time and standardizing desktop and server images, MDT enables you to more easily manage security and ongoing configurations. MDT builds on top of the core deployment tools in the Windows Assessment and Deployment Kit (Windows ADK) with additional guidance and features designed to reduce the complexity and time required for deployment in an enterprise environment.

MDT has been in existence since 2003, when it was first introduced as Business Desktop Deployment (BDD) 1.0. The toolkit has evolved, both in functionality and popularity, and today it is considered fundamental to Windows operating system and enterprise application deployment.

MDT has many useful features, such as:

Many features in MDT support Lite Touch Installation (LTI) for Windows 10. An LTI deployment strategy requires very little infrastructure or user interaction, and can be used to deploy an operating system from a network share or from a physical media, such as a USB flash drive or disc.

When deploying the Windows operating system using MDT, most of the administration and configuration is done through the Deployment Workbench, but you also can perform many of the tasks using Windows PowerShell. The easiest way to find out how to use PowerShell in MDT is to use the Deployment Workbench to perform an operation and at the end of that task, click View Script. That will give you the PowerShell command. 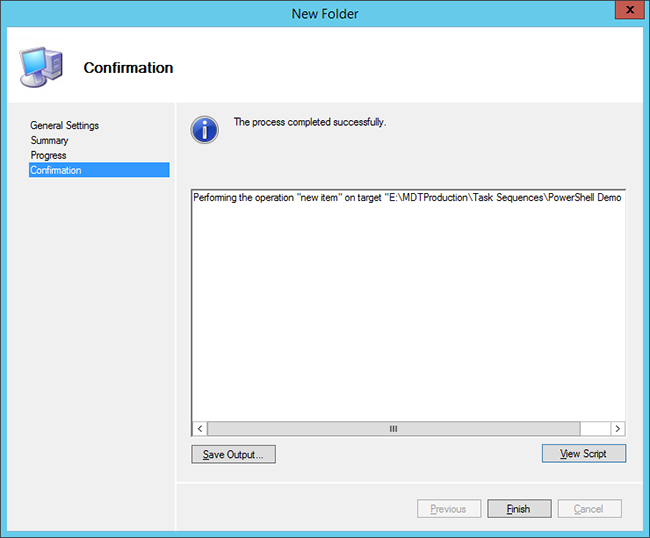 If you click View Script on the right side, you will get the PowerShell code that was used to perform the task.

The rules (CustomSettings.ini and Bootstrap.ini) make up the brain of MDT. The rules control the Windows Deployment Wizard on the client and, for example, can provide the following settings to the machine being deployed:

Example of a MDT rule. In this example, the new computer name is being calculated based on PC- plus the first seven (Left) characters from the serial number

Using the Deployment Workbench, you import the operating systems you want to deploy. You can import either the full source (like the full Windows 10 DVD/ISO) or a custom image that you have created. The full-source operating systems are primarily used to create reference images; however, they also can be used for normal deployments.

Using the Deployment Workbench, you also add the applications you want to deploy. MDT supports virtually every executable Windows file type. The file can be a standard .exe file with command-line switches for an unattended install, a Microsoft Windows Installer (MSI) package, a batch file, or a VBScript. In fact, it can be just about anything that can be executed unattended. MDT also supports the new Universal Windows apps.

You also use the Deployment Workbench to import the drivers your hardware needs into a driver repository that lives on the server, not in the image.

With the Deployment Workbench, you can add any Microsoft packages that you want to use. The most commonly added packages are language packs, and the Deployment Workbench Packages node works well for those. You also can add security and other updates this way. However, we generally recommend that you use Windows Server Update Services (WSUS) for operating system updates. The rare exceptions are critical hotfixes that are not available via WSUS, packages for the boot image, or any other package that needs to be deployed before the WSUS update process starts.

Task sequences are the heart and soul of the deployment solution. When creating a task sequence, you need to select a template. The templates are located in the Templates folder in the MDT installation directory, and they determine which default actions are present in the sequence.

You can think of a task sequence as a list of actions that need to be executed in a certain order. Each action can also have conditions. Some examples of actions are as follows:

MDT comes with nine default task sequence templates. You can also create your own templates. As long as you store them in the Templates folder, they will be available when you create a new task sequence.

MDT uses many log files during operating system deployments. By default the logs are client side, but by configuring the deployment settings, you can have MDT store them on the server, as well.

Prepare for deployment with MDT